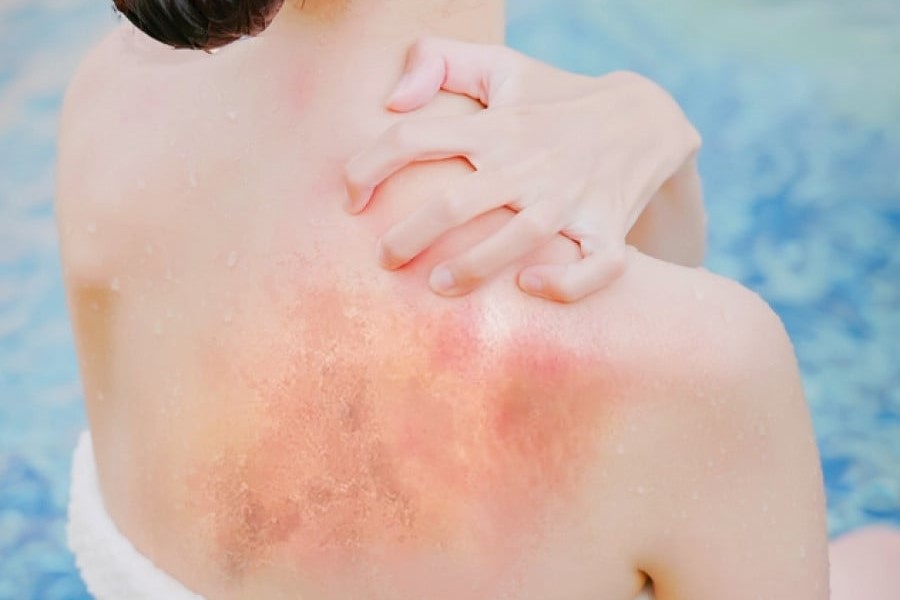 The term dermatitis, non-specific and generic, only indicates that the disease is characterized by inflammation of the epidermis and dermis, and is therefore not infectious.

In addition, in atopic dermatitis, the cutaneous manifestations are typical and vary according to the age of the person and are decisive in establishing the clinical diagnosis.

But above all, atopy must be present.

Atopy is a biological condition and it is the intrinsic characteristic of the disease that differentiates it from all other forms of dermatitis such as allergic contact dermatitis or dermatitis of an irritative nature.

Therefore, only if this condition is present can a certain skin inflammation be diagnosed as atopic dermatitis.

The term atopy refers to a personal or family hypersensitivity of the skin and/or mucous membranes to common environmental stimuli that leads to increased production of IgE and the development of symptoms such as conjunctivitis or asthma, or skin manifestations such than eczema.

Three important elements emerge from the above definition:

A person is born with atopic dermatitis, a defect that constitutes the outermost layer of the skin, the epidermis, where there is a defect in the skin barrier that defends us daily from external aggressions.

This barrier defect is due to a quantitative and qualitative alteration of certain lipid substances (cholesterol, essential fatty acids, ceramides) normally placed between the keratinocytes and to a filaggrin defect.

The outermost layer of the skin can be compared to the plaster of a wall which, only if intact, is able to preserve the bricks from atmospheric agents.

Similarly, it is only if the barrier function is intact that our skin is able to counter external aggressions, for example the chemical products of a detergent.

The damage to the barrier facilitates the penetration of irritating substances, capable of activating the inflammatory and immunological processes typical of atopic dermatitis, which, as mentioned, manifests itself differently in different age groups.

First two years: patches of eczema localized electively on the cheeks, forehead, chin with the perioral region spared. In addition to the face, the trunk and extensor surfaces of the limbs may also be affected. The plaques are well defined and erythematous in color, covered with scales and serous crusts. When the dermatitis is particularly extensive, lymphadenopathy, that is, an increase in the size of the lymph nodes, may be noted. For example, if dermatitis is present on the face, the submandibular or retroauricular lymph nodes may enlarge.

Childhood and adolescence: patches of dermatitis appear on the folds of the elbows, wrists, neck, back of the ears, knees and back of the hands. Given the site, cracks, sometimes painful, can often be observed.

Adult: The affected sites are similar to the previous ones but in this case the scrotum, the ankles and the neck can also be affected.

Itching is the ubiquitous symptom.

There is no atopic dermatitis without itching which, if particularly intense, incites the person to scratch, favoring the formation of scratching lesions but also the appearance of lichenification, a rough grayish thickening characterized by an accentuation of the physiological texture of the skin surface with a consequent loss of skin plasticity.

Moreover, it can be the cause of restlessness as it can interfere with a person’s sleep.

In the first case, Staphylococcus aureus can induce impetigo in patches of atopic dermatitis which become moist and exudative, covered with yellowish crusts.

Herpes simplex and varicelliform herpes are the most common causes of viral infections along with molluscum contagiosum.

Finally, with regard to fungal infections, P. ovale is responsible for the persistence of patches of atopic dermatitis on the upper third of the trunk in young women.

Recurrence is the salient feature of atopic dermatitis, which tends to improve in summer and then worsen in fall and winter, triggered by several factors

Most people with atopic dermatitis tend to improve after puberty while maintaining easily irritated skin.

However, between 5 and 50% of patients continue to suffer from atopic dermatitis in adulthood.

Treatment for mild forms of atopic dermatitis is topical treatment, which involves the use of emollients to soothe dry skin, cortisone or calcineurin inhibitors during the inflammatory phase, and antibiotics only if there is infection.

Only in severe cases is systemic therapy indicated, including cortisone, cyclosporine, or dupilumab.

In addition to these, phototherapy is a valuable aid in the treatment of atopic dermatitis.

A working group of specialists, possibly European, has drawn up the 2019 guidelines for a critical and timely approach to atopic dermatitis.

Live emergency even more… live: download the new free app for your newspaper for IOS and Android

Psoriasis, a disease that affects both the mind and the skin

Adverse drug reactions: what they are and how to manage side effects

What is and how to read the allergy patch test

Eczema or cold dermatitis: here’s what to do

How to keep mice away from homes: ‘effective’ methods to ‘keep them away for good’

Laundry tips for “extra cleaning power” – save money and help…