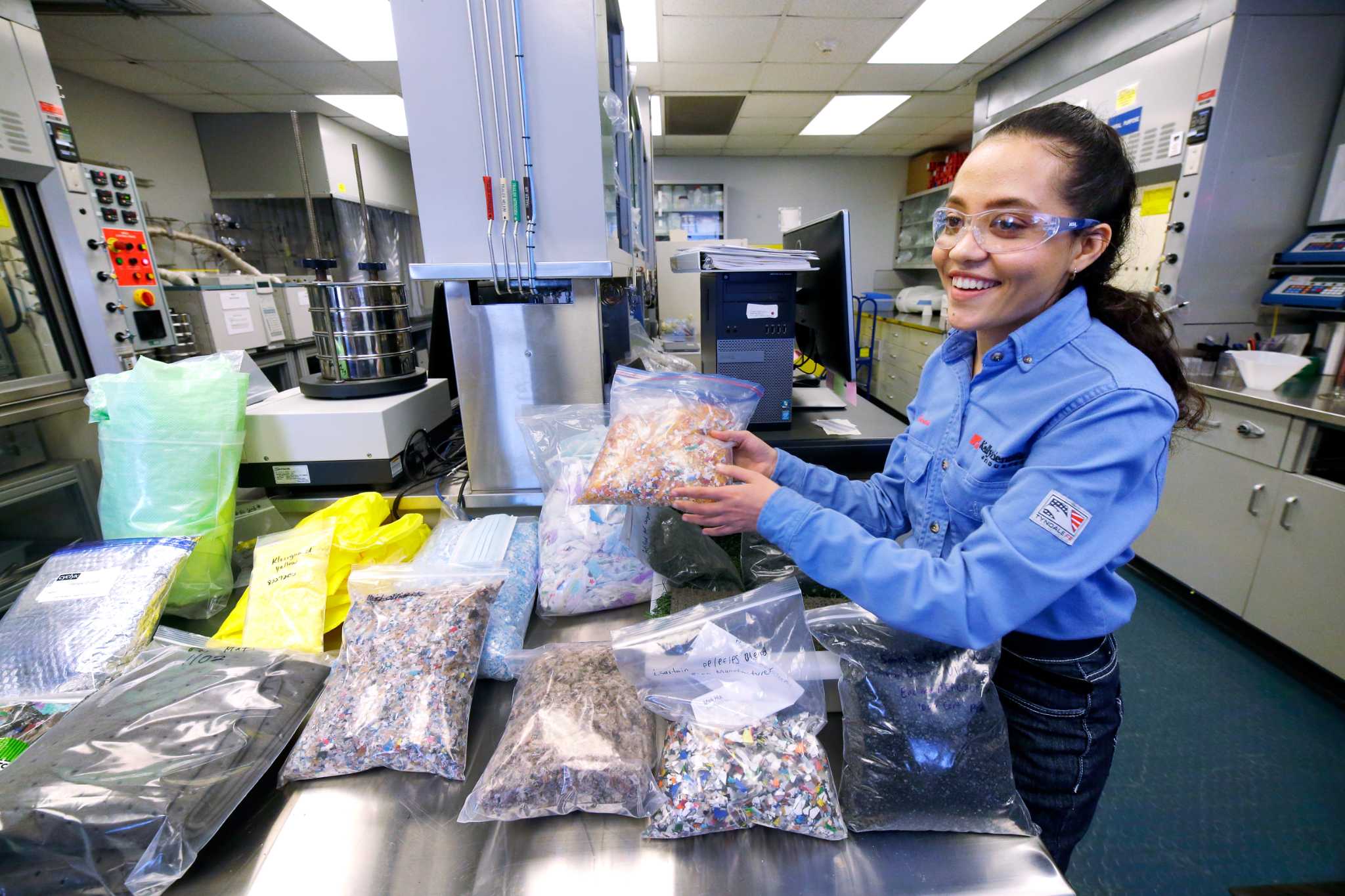 A stream of everyday plastics such as detergent containers, pill bottles and unsoiled diapers are already ending up in an ExxonMobil lab in Baytown, where the company is set to launch one of the largest the continent’s largest advanced recycling facilities.

Ziploc bags filled with torn pieces of plastic in all colors, separated by type, were inside Tupperware bins in a room next to the lab last week. A plastic rope was shredded into a bunch of neon blue fibers for testing.

Each sample must be small enough to pass through a machine that grinds it into fine particles. Then Exxon engineers analyze it, identifying the chemicals inside to see if they can be broken down chemically inside the site’s new recycling unit.

The Baytown unit is at the forefront of an emerging industry striving to create new ways to recycle plastic and keep pace with growing consumer demand for sustainable packaging. This demand is fueled by a new wave of commitments from retail brands, which promise their customers that more of their products will use recycled plastic instead of new plastic. More than 80 brands have made firm commitments to use at least 15% recycled plastic by 2025, according to a McKinsey report published in May.

Companies such as Exxon, Chevron Phillips Chemical and LyondellBasell are responding to this demand with significant investments in advanced recycling technologies that improve industry’s ability to break down and reuse so-called “hard-to-recycle” plastics. This is a massive change for companies used to working with oil and gas companies to buy raw materials – the basic chemical building blocks of plastics. Now they are branching out into new territory, working with waste management companies to purchase and process plastic waste.

Dave Andrew, Exxon’s vice president of sustainability, said he’s spent most of his career figuring out which contaminants in crude need to be separated – a proven process. Plastic waste feedstocks present new challenges.

“Literally we get bales of plastic waste with a bike or a lead acid battery stuck in the middle,” he said. “So we have to address all of these issues, which means consumer education and sorting. This creates a whole new value chain.

Today, only around 10% of plastics are recycled due to these challenges and because many plastics are difficult to process. American companies have collectively invested nearly $7 billion in advanced recycling projects since 2017, with the potential to divert more than 15 billion pounds of used plastic from landfills each year, according to the American Chemistry Council, a trade group. based in DC for the petrochemical industry.

Coca-Cola Southwest Bottling, for example, recently launched a new bottling facility in Houston and is the first US bottler to use recycled plastic in half of every new bottle it produces. Today, many manufacturing companies want plastics makers like Exxon to show a similar commitment.

Like the consumer push, regulations are also pushing manufacturers to act faster. A California law approved in June requires all packaging in the state to be recyclable or compostable by 2032.

Exxon has already recycled 11 million pounds of plastic waste at its petrochemical complex in Baytown since launching a test program at the facility last year. The company plans to launch the full-scale unit, capable of processing 60 million pounds a year, in December.

The initial effort has been such a commercial success – Exxon has sold recycled plastics to Berry Global, Amcor and Sealed Air for use in their food packaging – that it plans to build 14 similar units at its chemical manufacturing sites. worldwide capable of processing 1 billion pounds of plastic waste per year by 2027.

For its part, Chevron Phillips Chemical said it aims to produce 1 billion pounds of recycled polyethylene plastic by 2030 as the industry takes off.

“It’s a nascent industry that’s moving faster than anything I’ve seen before,” said Ron Abbott, director of sustainability technology for Chevron Phillips Chemical. “I’m very excited about what this could become.”

LyondellBasell is also experimenting with its own advanced recycling technology at its pilot plant in Ferrara, Italy. The company aims to produce two million metric tons per year of plastic made from recycled plastic feedstocks and plant-based feedstocks, such as starch and cellulose, by 2030.

The effort to meet the growing demand for recycled plastic does not come cheap. McKinsey predicted that recycled plastics could meet 4-8% of total polymer demand by 2030, requiring $40 billion in capital investment over the next decade.

As an industry, plastic makers have pledged to recycle 100% of the packaging they make by 2040, said Joshua Baca, vice president of plastics for the American Chemistry Council, noting that brands like Wendy’s, Warby Parker and Black and Decker already use recycled plastics in their products. The goal, he said, is to make single-use plastic “a relic of the past”.

The best fabric softeners remove wrinkles without a trace