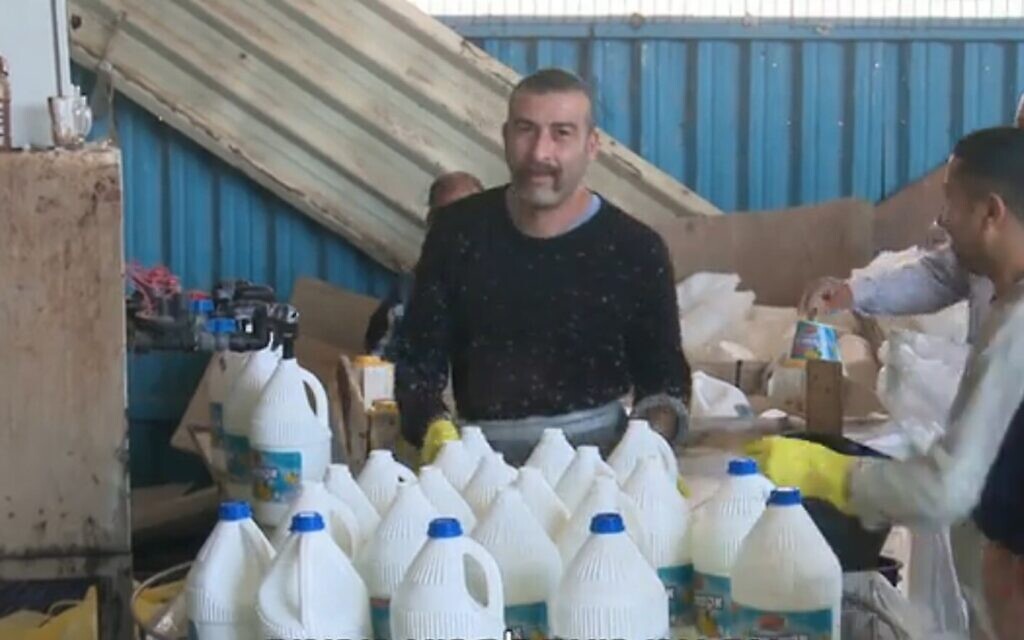 A major manufacturer of cleaning products is selling items to state institutions made in a factory that does not have any of the necessary health permits for the products it uses or produces, Israeli TV reported Wednesday.

Sano, a household name and a heavyweight in the local market, operates a subsidiary, Sano Professional, which sells cleaning detergents to public institutions, prisons and hospitals. However, some of the items are produced at the Yahalom factory in the West Bank, which Channel 12 reports are completely unregulated.

The Yahalom factory has been operating for more than 15 years in an industrial zone near the settlement of Karnei Shomron and employs 50 Palestinian workers.

A video, some of which was apparently secretly recorded, showed employees filling bottles using a hose and screwing the lids on by hand.

Owner Avad Al-Karim admitted to the station that his factory did not have a permit, but insisted that its products were the same as those made by Sano at its factory in Emek Hefer, central ‘Israel.

“What you buy in the original Sano is the same thing,” he said. “It’s just that he has a license and I don’t, that’s all.”

Professor Itamar Grotto, former Deputy Director General of the Ministry of Health, warned of the dangers posed by the chemicals used in such factories and their end products.

“These materials sometimes cause poisoning, sometimes illness, exposure to carcinogenic compounds. All of these things are dangers that can definitely come from prohibited materials,” he told the networks.

Among the items provided by Yahalom is a liquid soap that is supposed to have the approval of the Ministry of Health. The product is sold by Sano to health departments, fire departments, prisons and hospitals, according to the report.

A label on the soap identifies it as being made at the Emek Hefer factory in Sano, but a private investigator discovered several months ago that containers with the same labeling were produced at the Yahalom factory, the report said. .

Sano Professional CEO Rafi Poplavski played down the company’s ties to the factory. However, Yahalom workers claimed that one truckload of products per day is sent to Sano Professional.

Although tenders to supply state institutions specify the need for the appropriate permits, Sano was able to bid lower and win the contacts, the report said, saying government entities were aware of the government’s concerns. Yahalom factory regarding potentially dangerous unmonitored products, but nothing has been done. Finished.

The annual market for supplying detergents and cleaning products to institutions is NIS 1 billion, of which San Professional earns a quarter, according to the report.

Sano Professional said in a statement that in response it has halted all business with Yahalom until he clarifies “the claims that the company [Sano] didn’t know at all.

The company said it sources its items from many factories and its dealings with Yahalom are “small scale”.

“If any deficiencies are discovered, we will correct them,” the statement said.

Two years ago, representatives of the Ministry of Economy visited the factory and advised to install a proper mechanical production line. But Karim told the station it would cost up to NIS 400,000 shekels ($119,668) and force him to lay off workers, which he does not want to do.

A worker told Channel 12 that employees earned NIS 13 an hour, less than half the minimum wage in Israel. Karim has previously been found guilty of paying workers as little as 9 shekels an hour, according to the station, which did not say whether it happened at the Yahalom factory.

You are a dedicated reader


We’re really glad you read X Articles from The Times of Israel over the past month.

That’s why we started The Times of Israel ten years ago – to provide discerning readers like you with must-read coverage of Israel and the Jewish world.

So now we have a request. Unlike other media, we don’t have a paywall in place. But since the journalism we do is expensive, we invite readers to whom The Times of Israel has become important to help support our work by joining The Times of Israel community.

For just $6 a month, you can help support our quality journalism while benefiting from The Times of Israel WITHOUT ADVERTISINGas well as access Exclusive content only available to members of the Times of Israel community.

Thanks,
David Horovitz, founding editor of The Times of Israel

Already a member? Log in to stop seeing this